When making P semiconductor and N semiconductor together, be in place of their face of have a common boundary, because majority of two kinds of semiconductor carries,flow child chroma difference is very big, because the cavity of this P area is met,diffuse to N area, in the meantime, the free electron of N area also can diffuse to P area, if pursue,1 is shown. Arrowhead of the dotted line in the graph represents the mobile way of the cavity in P area, solid line arrowhead represents the mobile way of the free electron in N area. 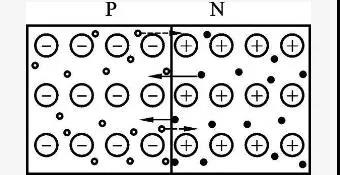 Inside below the action of force of electric field electric field, of P area little child free electron is met to N area drift, of N area little child hole also is met to P area drift. The directional as it happens that moves adrift and enlarge loan in bulk the way that change is opposite. Complemented to make the hole that area of the P on the interface loses so to the cavity of P area from N area drift, and the free electron that from P area drift the free electron to N area complemented to hand in place of area of the N on the interface to lose so, this makes the charge between be free becomes little. This shows, the action that moves adrift is to make narrow of space charge area, loan in bulk with enlarge the effect just in time that use is contrary. In mix without adscititious electric field other arouse action, participate in enlarge to loan in bulk those who move is much child amount and those who enlist drift campaign is little child when number is equal, achieve dynamic balance, this is the space charge area of the certain ply that two side form surface of have a common boundary, call PN form. Block up of area of this space charge is much child diffuse, because this also weighs barrier layer; Because did not carry almost among them,flow again child, because this weighs depletion layer again. If pursue,PN writtens guarantee 2 are shown. 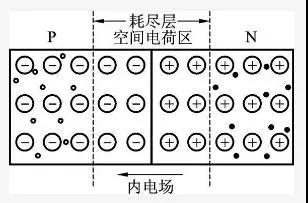